Chawla and Lee have given their first preferences to Transport Matters.  Seriously, Transport Matters could be the dark horse in this election.  After that, their votes go to the Animal Justice Party and the Voluntary Euthanasia Party, followed by Derryn Hinch’s Justice Party.  They definitely favour small parties over large ones, and have put their local friendly ungrouped independents at 22-24 on the ballot.

They have put Labor ahead of the Greens and Liberal, with these three parties occupying places 29-43 on their ticket, and have saved some ire for the Health Australia Party, possibly because anyone who is disabled is likely to have a low tolerance for woo.  At the bottom of the ballot, they have the LDP, then the Shooters and Fishers, the DLP, and last of all, the Australian Liberty Alliance.  I am not surprised that independents who are passionate about ending violence against women have little time for political parties who are pro-gun and, in the DLP’s case, anti-divorce (historically, at least – I haven’t checked on them yet this year).

Just for fun, let’s see who is reciprocating.  The ALP have put them at the top of their ticket (by which I mean, directly after their own people), as have Transport Matters and Derryn Hinch (who has strong feelings about family violence).

The Liberal Party, on the other hand, have put them second last on the ballot, way behind the other, ungrouped, independents, and the Socialists and Animal Justice Party have also put them right near the bottom.

But they’ve done pretty well in the preferencing, I’d say.  If they can get a good number of first preference votes, they might squeak in.

Tarang Chawla and Nicole Lee are running as Grouped Independents in the South Eastern Metropolitan region, which is a region that is very richly endowed with Independents indeed this year.  (You lucky ducks!  Nobody gave me any independents in my region at all, even though I was *very* good this year.)

During October, one woman was killed on average every three days.

Violence against women is a national emergency and requires strong leadership from all levels of government to properly address the issue.

This meet up is your opportunity to talk to and hear from Tarang Chawla and Nicole Lee, your independent candidates for the South East Metro.

Tarang Chawla is a Young Australian of the Year Finalist and anti-violence advocate whose sister Nikita was murdered in 2015. Nicole Lee is a sexual assault, domestic violence survivor and disability advocate.

Their platform is a single issue one – they want to end violence against women.

Chawla was born in India and moved to Australia with his family as an infant.  After his sister’s murder by her husband, Chawla became an outspoken advocate against male violence towards women.  He is an Advocate for the Victim Survivors’ Advisory Council, an Ambassador for Our Watch, and serves on the Ministerial Taskforce on the Prevention of Family Violence and other forms of Violence Against Women.  He was also a finalist for Young Australian of the Year in 2017.

Here’s a quote from one of his articles (I’ve provided sources and links to all the articles quoted or used for this post below):

So much of the reporting around Niki’s murder focused on the colour of her skin or her cultural background. There were suggestions in the mainstream media that Niki’s death was an honour killing or that it was motivated by South Asian cultural norms…

Reporting that puts the onus on women to be safe, focusses on ethnicity, or the stress that the perpetrator was under, has the effect of diminishing their responsibility for their crimes. We’ve already seen this pattern in the reporting of Eurydice Dixon’s alleged murder. To be clear, Niki’s death was a crime, a murder where one man chose to take the life of a woman…

When women are murdered, we respond by thinking, “What did she do?”, and not “Why are men violent?”

You will not be surprised to know that I’m liking Chawla a lot.  He seems to have a really good understanding of the broader societal issues that underlie and enable abusive relationships.

Lee survived a decade-long abusive relationship with her former husband, who was also her disability carer, and has become an advocate for people with disabilities.  Her story is absolutely harrowing, and really highlights the difficulties faced by disabled people in abusive relationships, who rely on their abusers for basic care.

“That day when the police decided to put an intervention order on him and remove him from the house, I was sent home on my own without anyone considering how I was going to cope.”

Almost two months later and feeling lost with who to turn to for support, Ms Lee said she approached child protection services to help lift the intervention order, inviting her husband to re-enter her home.

Fortunately, they were able to link her up with resources that did not involve inviting her abuser back into her life – but the fact that this was what it took is a pretty horrifying insight into the way our systems work.  It seems that there is no integrated support for people with disabilities who are also abuse survivors, and this is a real problem.

Chawla and Lee’s main campaign website is Chawla’s Facebook page.  They seem to have two slogans; “End Violence against Women” and “Will you be the 1 in 5?”  – the idea being that 1 in 3 women experience violence during their lifetime, and it only takes 1 in 5 people to vote for this issue to be fully represented in Parliament. The first one is a good straightforward slogan for a single issue party.  They are here to end violence against women, and that’s their priority.  The second slogan is more of an invitation to action – very apt for activists! – with some embedded encouragement to see real change as possible and something that you can be part of.  Nice work.

The main inspiration for running for Parliament is the recent Royal Commission into Family Violence.  Labor has committed to proceeding with the recommendations of the committee, but the Coalition has not, and they feel that it’s crucial to have victim survivor voices in Parliament for this discussion.

Since they don’t have a webpage, I’ve done a bit of trawling around on Facebook and Twitter to see if I can get an idea of where they stand on other issues.  They are, unsurprisingly, not impressed by attempts to turn Friday’s attack into an excuse for racist beat-ups, nor are they impressed with Luke Foley (or, indeed, Elliott), and there are a number of comments supporting diversity of all kinds.  But violence against women really is their one and only priority and makes up a good 95% of Chawla’s posts (Lee also has a good chunk about disability advocacy issues).

This open letter by Chawla is probably the best indicator of how they would vote on other issues. 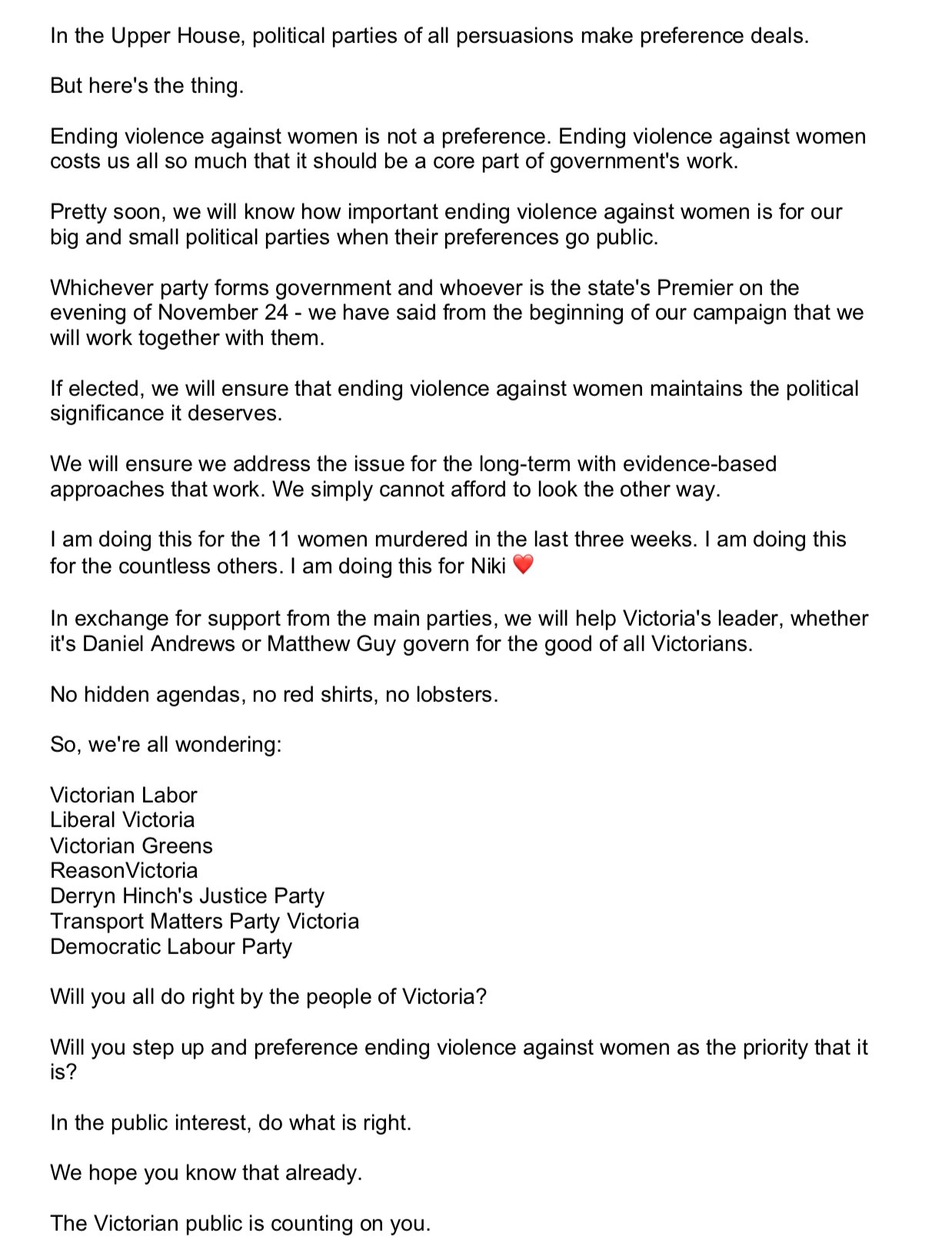 I mean, odds are, they will lean to the left, because odds are that anyone supporting their agenda will also be left leaning.  And anyone who uses phrases like intersectional feminism in a casual Tweet is probably not someone you are going to find on the right wing.

Basically, Chawla and Lee look like good people to give your vote to if you want to send the message that violence against women should be a priority. They come across as intelligent, articulate people who are committed to their cause – and it’s a good one.  Frankly, if I lived in the South-Eastern Metro region, I’d probably be putting them first.

I hope they do well.

Articles by or about Tarang Chawla

This site uses Akismet to reduce spam. Learn how your comment data is processed.